Knights of Sufferlandia and 30 miles of running 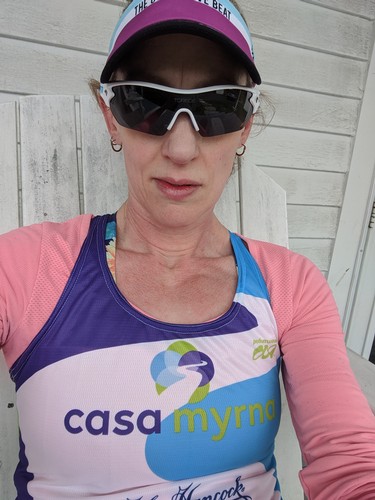 I was going a little crazy at home. It turns out that when work and home are the same, you need to find ways to break up the day a little more. I’ve been working out twice a day although I’ve also been eating twice as much. Who knows where this will lead.


The Boston marathon was supposed to be my 45th birthday gift to myself. Last year, on my 44th, I did my first 70.3 (Florida, so hot). This wasn’t my first marathon, but it was BOSTON and I was fundraising for it. The story goes like this: in my twenties I got involved with an older man. I was vulnerable with low self-esteem and major depression. I was floundering in life. This man convinced me that he loved me. The day after our first date, he rode his bike 30 miles to drop flowers off at my door and then he called the house multiple times “worried” because I wasn’t home. I didn’t see these things as warning signs because I was conditioned to see them as romantic. He manipulated me and I quickly lost myself in this relationship. I moved in with him. Eventually I paid the down payment on a new house for both of us, but because I had quit my job to go back to school, I didn’t have the money to pay the monthly mortgage, so he paid that. We were financially entangled and without a job, I felt trapped. Thankfully, the relationship never became physically abusive, but it was not a healthy relationship. It took several years to finally leave. When I did there were phone calls where he showered me with abuse and others where he asked me to emotionally support him. Disentangling was hard. Throughout it all, I was an athlete, but by some terrible coincidence as I was leaving, I suffered a devastating injury and lost my sport as well.


What does this have to do with Boston? Well, when I decided to run Boston for charity rather than continuing to chase a BQ, I chose Casa Myrna, a charity that supports survivors of domestic abuse. The fundraising goal was lofty, but I believe in the mission, so I was committed to raising the funds. I was almost halfway done when they announced that Boston was postponed. I wasn’t sure what I would do, but I knew I would continue to raise money. With everyone trapped at home together, domestic violence rises, and the services are more needed than ever.


Two weeks before the original marathon date, a friend suggested a challenge: since we’re all trapped at home, why don’t we do the Knights of Sufferlandia? The Sufferfest is a cycling app with a series of cycling workouts. The conceit is that you are a citizen of the fictional Sufferland and you must compete in races and suffer for the glory of your country, or some such thing. To become a “Knight of Sufferlandia” you must complete 10 workouts (roughly an hour) back to back with only 10 minutes between. This was the challenge, so on April 19th I loaded up on snacks and climbed on to the trainer. Eleven hours and 30 (ish) minutes later, I was done.* I raised about $300.


Two days later a friend suggested that we do the Yeti 24 hour challenge. This requires you to run 5 miles every 4 hours for 24 hours (30 miles), so less than as week after completing the Knights of Sufferlandia, I finished that as well.**


*Oh, fine, this is a recap so I should probably tell you how it went—


**Turns out this is not so bad. I suffered in the overnight legs, going from 10 minute miles to 12 minute miles. I suspect my suffering was because I prioritized sleep over food but I think if I had just eaten after every leg I would have been fine. I’m now looking for new challenges.