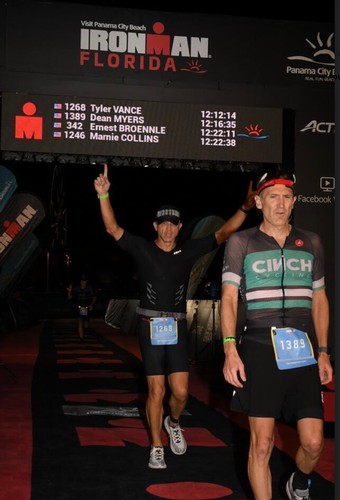 Great day for North American Racing to restart! Great weather with some solid cloud cover and wind. The swim was choppy and the bike and run had some consistent winds too. Social distancing rules meant some changes with race bags and special needs bags and the finish line was a ghost town. The PCB spectators on the run were great and really supported everyone.

IM Florida was a great event all things considered.  Wednesday and Thursday, each participant had a specific window for checking in.  Temperatures were taken before entering. Masks were worn at all times. There were a few vendors present in the village but for the most part, it was not very active.  Not much by way of event specific gear in the IM store either, most everything was generic IM branded, but nothing really race specific.


Friday was bike check in.  You were also given a time for that.  Racked your bike and left your run and bike bags and left. No real hanging around.


Race Day: Upon entering the transition area we dropped off our special needs bags and went to our bikes.  For the purpose of safety, you were required to keep your run and bike bags by your bike for the entirety of the event.  Everything had to stay in the bags.  No setting things out. No clipping in your cycling shoes either.


Prior to start time, everyone lined up by their bikes and then were called to line up by swim times. When your swim time was called, you would walk to the beach corral area and enter the chutes.  Just prior to entering the water, you would take off your mask and throw it in the trash.


The swim was choppy and there was a definite current.  It was a two lap swim with a beach run in between laps. After getting out of the water they had showers, but no wet suit strippers, so you had to do that yourself.


The bike course was flat and the weather was overcast and windy. In order to get your special needs bag, you had to dismount your bike and get it yourself.  After finishing the bike you had to go back and rack your bike.  There was no one there to take it.


During the run, there were plenty of spectators and plenty of aid stations.  It was a good atmosphere and a solid experience.  The finish line was spectator free and pretty much a let down, but hey, at least we are racing again.  IM did a solid job making the race happen at all.  Hopefully we can keep doing them.